“The Gallatin County Detention Center continues to set the standard for detention facilities across the state,” said Gallatin County Sheriff Dan Springer. “The design, engineering and operational planning created a facility which still looks new, is highly functional and safe for the detention staff and inmates. This is what happens when community wide collaboration occurs. This process took a number of years, but we got it right and we expect the facility to continue serving this community well into the future.”

To give each person the best chance at success when they re-enter society, the Gallatin County Detention Center offers programs for inmates including medical and mental health services, tutoring, job service, addiction programs and life skills classes. The Detention Center also has a Fresh Start Reentry Program to assist inmates with a discharge plan and follow-up so they can overcome the hurdles that are common on re-entry. Inmates who take advantage of these programs are less likely to return to jail, which leads to lower criminal costs, healthier families and less crime. Gallatin County Detention Center was the first facility in the state to provide these programs to help inmates improve their lives during and after detention, and to rebuild a successful life after leaving.

Thanks to the hard work of staff and volunteers in providing this critical programming for inmates, the recidivism rates of our inmates has maintained at about 18% for the last few years. That is well below the national average.

Some statistics since April 21, 2011, when we first began moving inmates into our detention center: 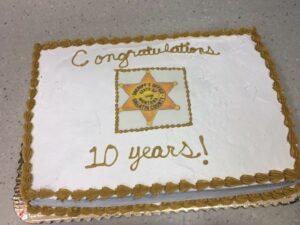