On April 3, 2022, at 1:53 pm, Gallatin County 911 received a call from skiers caught in an avalanche while ascending the north face of Wilson Peak in Big Sky.

The reporting party had a GPS communication device and was able to call for help. Gallatin County Sheriff SAR members from Big Sky and the Helicopter team responded to the patient’s location. They were able to land near the patient, load both into the helicopter and fly them to a waiting Big Sky Fire Dept Ambulance. The patient was transported to the Big Sky Medical Center for further evaluation.

Sheriff Dan Springer would like to commend the skiers for having a communication device that allowed them to call for help immediately and be rescued in a timely manner. Having a plan and equipment for emergency events when recreating in the backcountry can make the difference between a quick rescue or spending an unexpected night in the mountains. 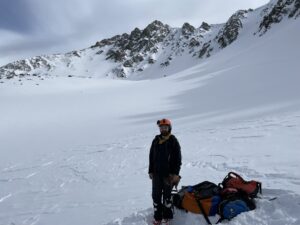